Ever wondered who is really driving all those Teslas? Every time when you are on the road is there really a German luxury car in next lane or are you just dreaming? Are they really taking over the US market!? Are US automakers pretty much relegated to selling Trucks? And their measly stock prices are indeed justified by what people are buying? Then what are the most reliable brands that everyone is buying?

The chart below from my recent study of about 4000 vehicles in Portland, OR helps answer some of these questions.

Despite being the most valuable automaker, the number of Teslas in market is even lower than Minis & Scions. Tesla stands at number 24, out of 25 top brands. Although Toyota & Honda are clear leaders in total number of vehicles on road, the German luxury brands are slowly getting closer to eclipsing the US automakers. In fact, the biggest segment for US automakers is Trucks/SUVs/Vans & they trail far behind in sedans. If you were to blindly guess the vehicle type for a US brand, you will be wrong more than half the time when picked a sedan.

So what are the key takeaways? I will have to go into details in a separate post, but here is a short summary.

To truly stand out, buy a Tesla or a Cadillac. Tesla: because they are the new head turner, and very rare. Cadillac because they are almost dead and nowhere to be seen. The Pacific Northwest prides in their hippie Subarus but they are not as ubiquitous as they are claimed to be. GM, Chrysler, and to some extent Ford, are mainly left with selling trucks. Toyota is beating everyone by a long margin, in total vehicles, in sedans, in trucks, and in hybrids. Honda is close but there is a long gap after that. Nissan is a surprise with as many as Subarus and more than Chrysler but their Fiat brand is nowhere to be seen. When you say hybrid, you might as well say Prius because there isn’t anything else out there. EV is not as popular as everyone claims to be. And whatever is there, it’s almost all Nissan Leaf. Did you know how surprisingly cheap it is? Just lookup (spoiler alert: there is an almost 65% discount on on it after dealership rebates, tax breaks, employer discounts & new credits from the recently passed $5.2 billion Oregon infrastructure bill).

This is the key plot. Take a look & let me know your observations. I will follow with a longer post later this week. 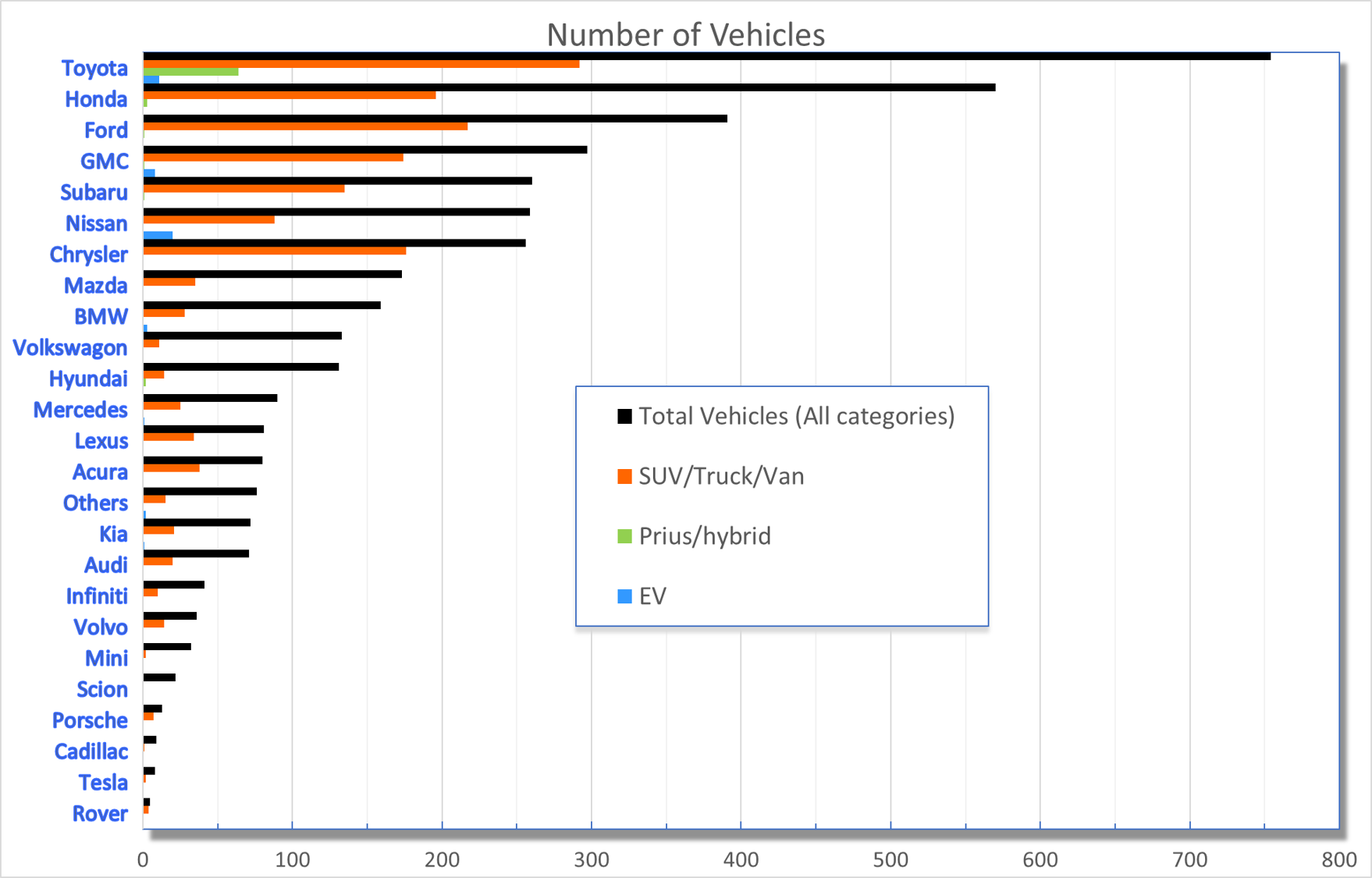