Not that easy to disrupt the black money. 99% of the cancelled Indian banknotes are now accounted for. But did the side effect of demonetization result in more digitization? 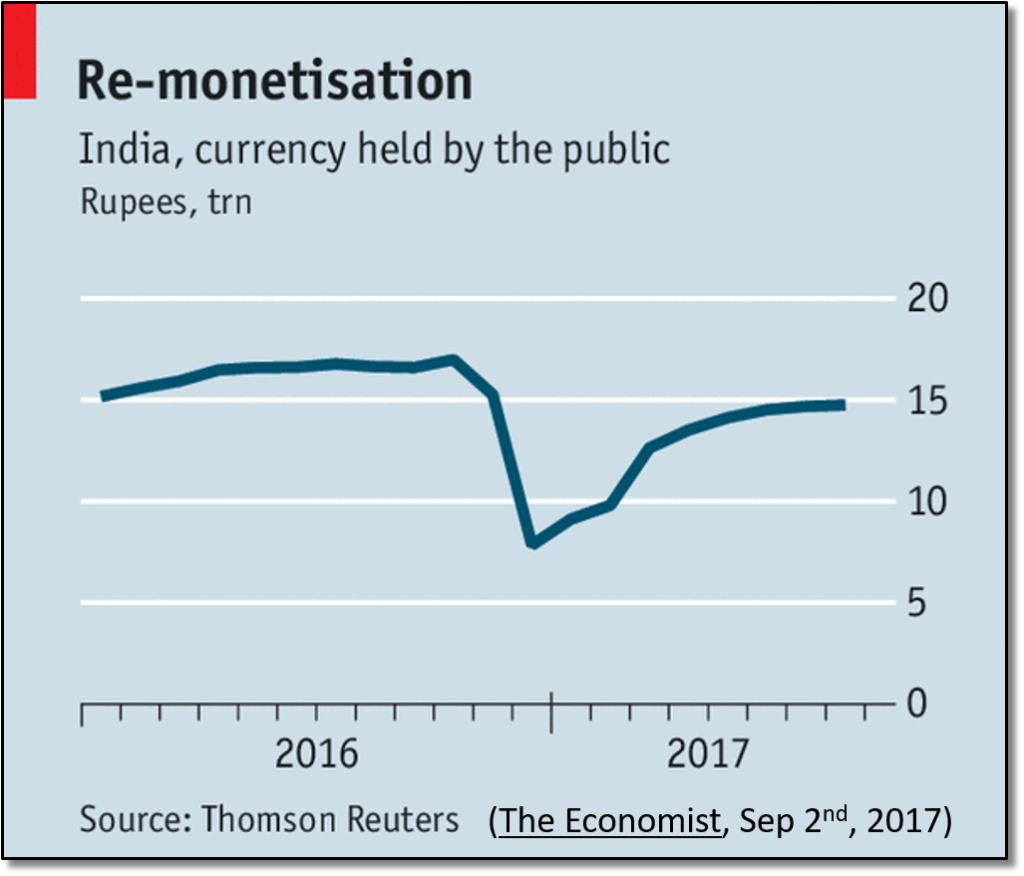 Fig 1. Total Indian Rupees in circulation (The Economist, Sep 2nd, 2017). Big dip is due to demonetization, but still lower than a peak of Oct 2017 due to several efforts by government to discourage cash transactions.

When the Indian government cancelled the high denomination notes on Nov 8, 2016, one of the goal was to get a quick windfall from money that won’t be returned. And it made sense. Those hoarding cash had to bring it back and explain their source. High net worth income individuals and Indian wives, famous for keeping their cash under carpet, were not expected to return a significant part of their hoard. The government planned to re-print these missing notes & count them as their own money, allowing it to indirectly transfer this ‘black money’ from hoarders to the Indian taxpayer.

However, the Reserve Bank of India reported on Aug 30 that 99% of the notes have been received back. The RBI annual report (page 195) says that 15.28 trillion rupees ($241 million) out of the 15.4 trillion rupees withdrawn from circulation have been returned back to the banks. The original expectation was between 3 and 25%, thus giving the government a big windfall. Either people didn’t hoard large cash, which is highly unlikely for a cash based economy, or they managed to return it back despite careful monitoring by the government.

This demonetization effort was heavily criticized by experts and resulted in big pains for the Indian consumer and economy. Businesses came to stand still for months while people lined up at ATMs to withdraw their minimum daily cash allowance.

One of the key outcome of this exercise was the strong focus on digitization of the Indian economy. The government launched several efforts to make the economy less dependent on cash. The data below gives an assessment of how these efforts have fared. The percentage growth is impressive, but the absolute numbers are still pretty low.

Looking at the total paper transactions, there is a steady drop of about 5% over last two years. The retail electronic transitions have almost doubled in past two years suggesting businesses are more open to accept electronic payments. However, the credit card payments are still pretty low, almost 5% of all known retail transactions.

Indian economy is highly unregulated and these numbers from RBI tell only a small part of the full story. Majority of Indian consumers shop at small mom and pop stores that buy their goods from larger wholesale stores, which are in essence dealers of large corporations. This supply chain, developed by the large manufacturers & multinationals, is strangely very efficient in delivering good. But most transactions are cash based & rarely use a paper trail of documentation. Therefore, majority of transactions do not appear in any reports. Government’s efforts to digitize the economy not only provides a proper documentation of these transactions, it brings them to the wider tax system. However, India is still a long way from anything close to developed economies like US or Europe.

There are few dramatic changes going on for Indian consumer. The recent surge in e-commerce has penetrated deep into India including rural markets. Heavy competition between Amazon & local giants like Flipkart & Snapdeal has benefited the average consumer. Additionally, the growth in smart phones and 4G internet, led by Reliance Jio, has connected a large number of consumers to global market although their purchasing power is nowhere close to western economies or China. To paraphrase Jack Ma of Alibaba: the biggest story of previous century was selling to US consumers; this century will be about selling to China. Very soon, this story will include India. And market forces will decide this future growth despite government cameos like demonetization and Digital India.