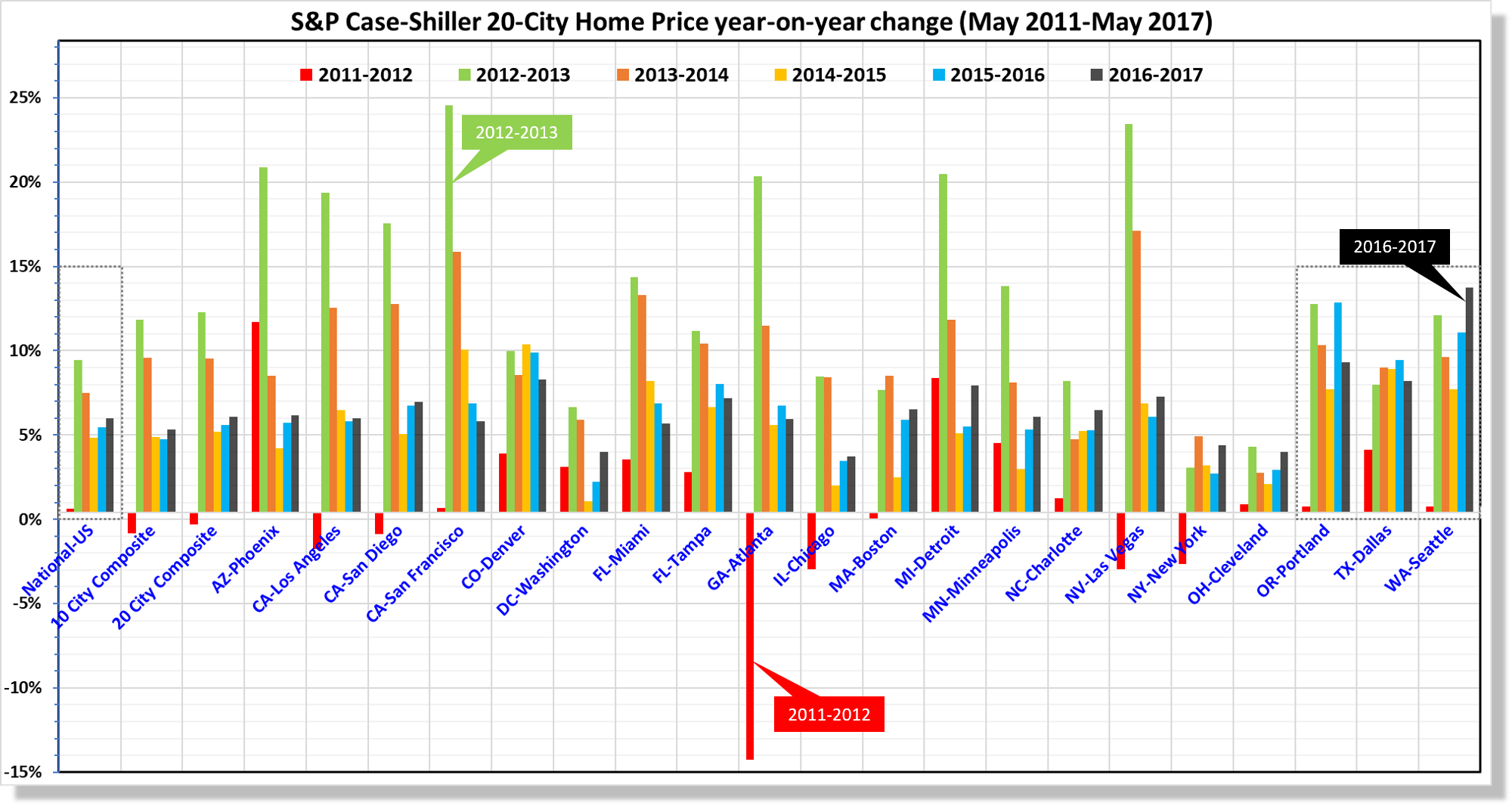 Figure 1. Lot of upswing.  US home price change (in percent) for top 20 cities for 2011-2017 (Click to enlarge). Key summary: (1) After the worst year of 2011-2012, a huge upswing in 2012-2013 across the country; (2) Best gains are in South-West SF-LA-Phoenix-Vegas corridor; (3) While US National growth has stabilized at about 5%, Pacific NW regions of Seattle-Portland and Denver-Dallas are still growing at almost 10%. This data is compared for month of May for each year (all other data below are for month of June). The data is available from several sources including S&P US Indices, Zillow, & Federal Housing Finance Agency. 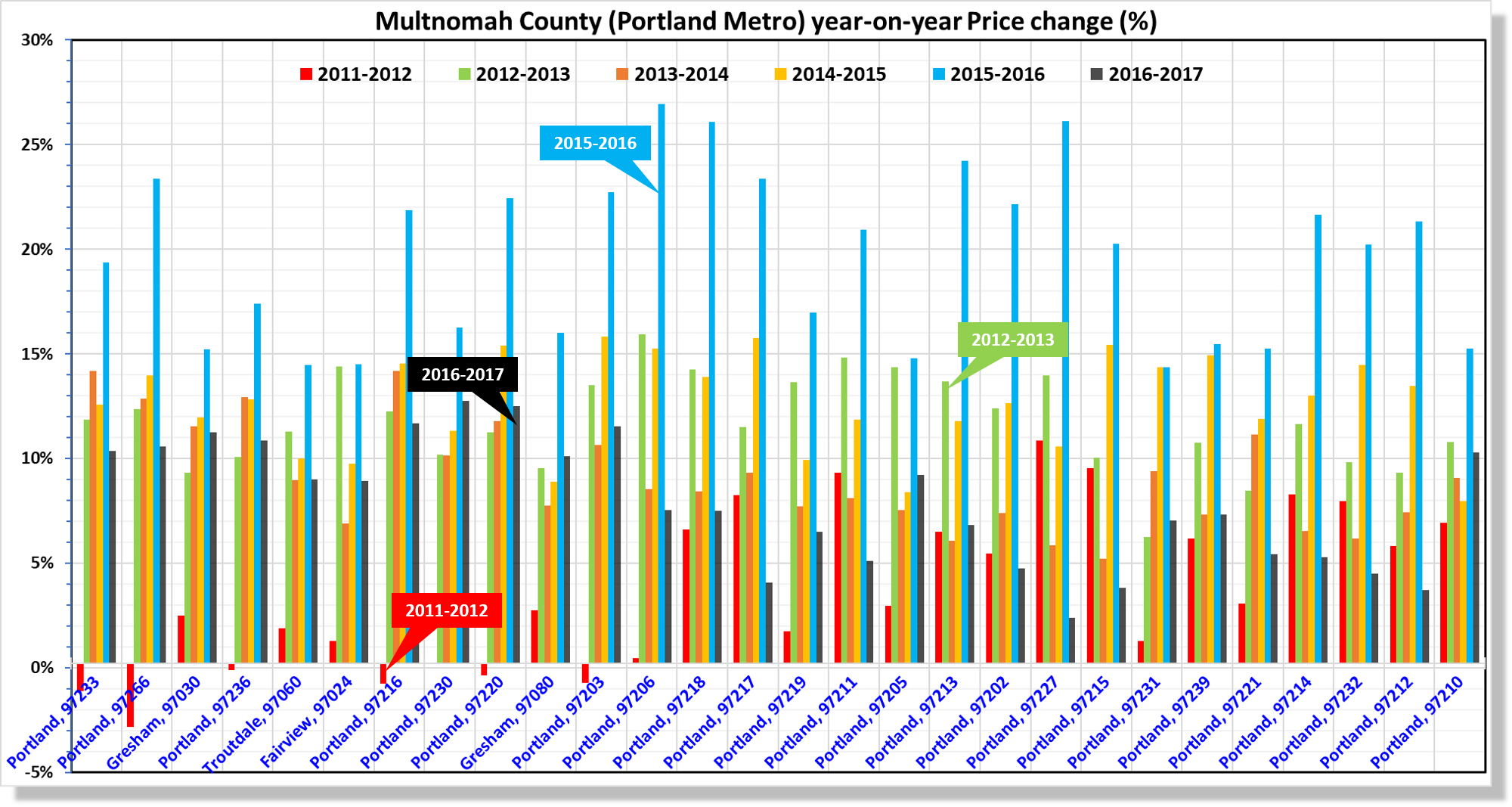 Figure 2. Still got momentum. Home price change (in percent) by zip-code in Multnomah county of Portland Metro, OR-USA (Click to enlarge).  Key summary: (1) Almost no price drop in 2011-2012, similar to other metros; (2) however, highest growth was in 2015-2016 instead of the nationwide peak growth in 2012-2013; (3) not a very strong correlation between price change to actual price (x-axis is plotted to show current house prices in ascending order, from left to right); (4) the most expensive neighborhoods (on the right side) had already started to appreciate in 2011-2012 & are still growing; (5) mid-price range neighborhoods have almost peaked & growth is <5%; (6) As prices increase, people are forced to buy in low-cost neighborhoods (left side on x-axis), and therefore those are growing at almost 10%.  Data from Zillow (which unfortunately does not include all zip-codes), raw data here. To see the actual home prices by neighborhood, see Chart of the day, Aug 1, 2017. 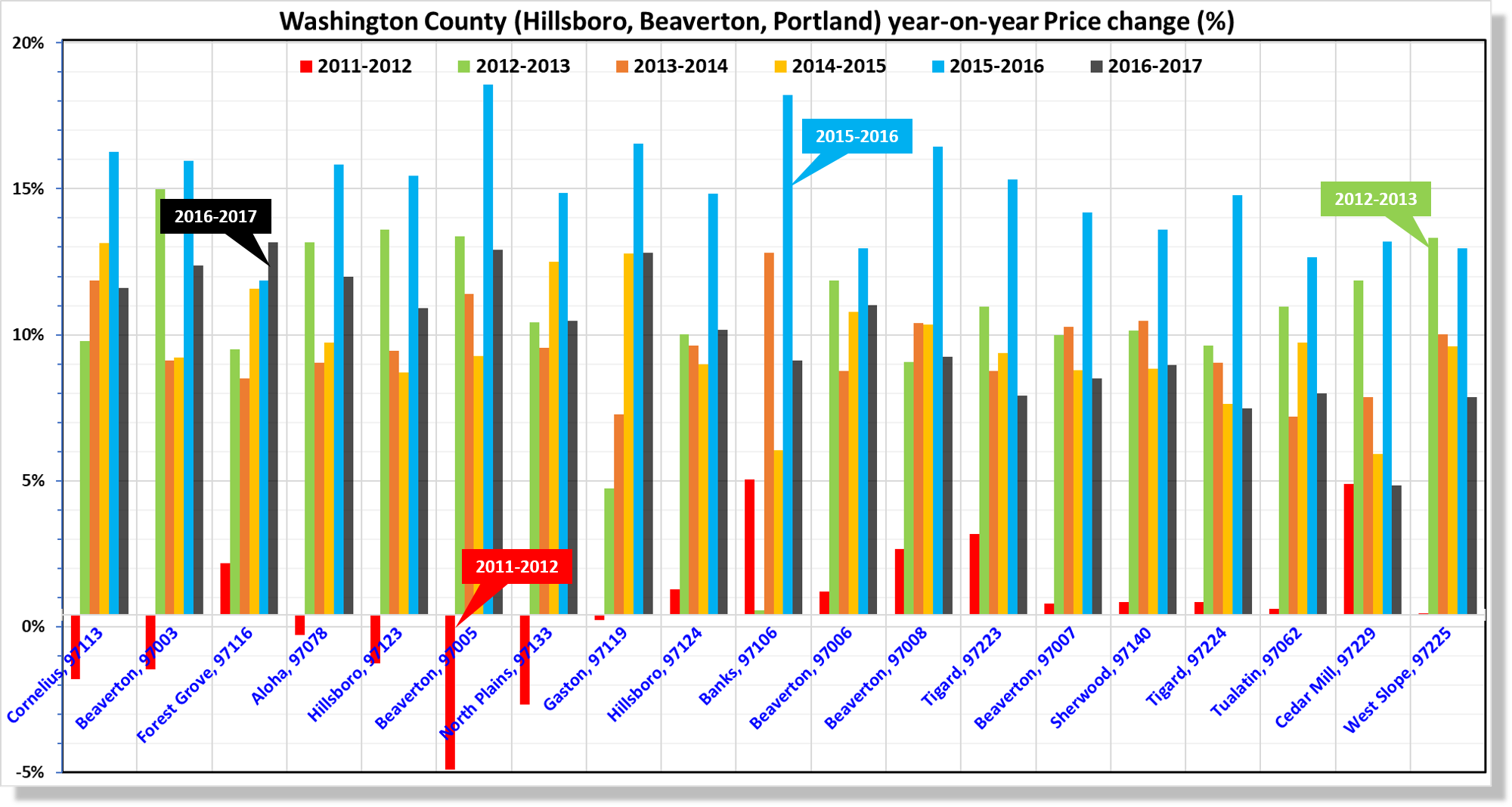 Figure 3. Growing growing growing. Home price change for Washington county, Portland Metro (this region includes the high-tech corridor of “Silicon Forest” with Intel, Nike, and coveted neighborhoods of Bethany & Skyline, Click to enlarge). Key summary: (1) Not as explosive growth as Multnomah county, but consistently growing at 10-15%; (2) as seen for Multnomah county, not a very strong correlation of growth to actual prices (house prices increase on this chart from low to high on x-axis as we go from left to right); (3) again, the most expensive neighborhoods (on the right side) had already started to appreciate in 2011-2012 but still growing; (4) lower priced neighborhoods (left side) are still growing more than the expensive ones (right side); (5) the Cedar Mill area (that includes Bethany & part of Skyline) is anomalous: it includes some of the best schools in Oregon & is preferred by the immigrant population working in the high-tech corridor; prices didn’t drop in 2011-2012 but growth is low due to extensive construction & already high prices; (6) strong growth in the outskirts & previously untapped neighborhoods of Aloha, Forest Grove, Banks, North Plains & Hillsboro; you can drive over and see once-in-a-lifetime generational change & inequality in action: low income families being pushed out by new construction boom and young, highly educated families moving to newly developed communities; the State of Oregon is working hard to bring more business & majority of it is moving to Washington county. Original data from Zillow, and raw data here. To see the actual home prices by neighborhood, see Chart of the day, July 31, 2017. 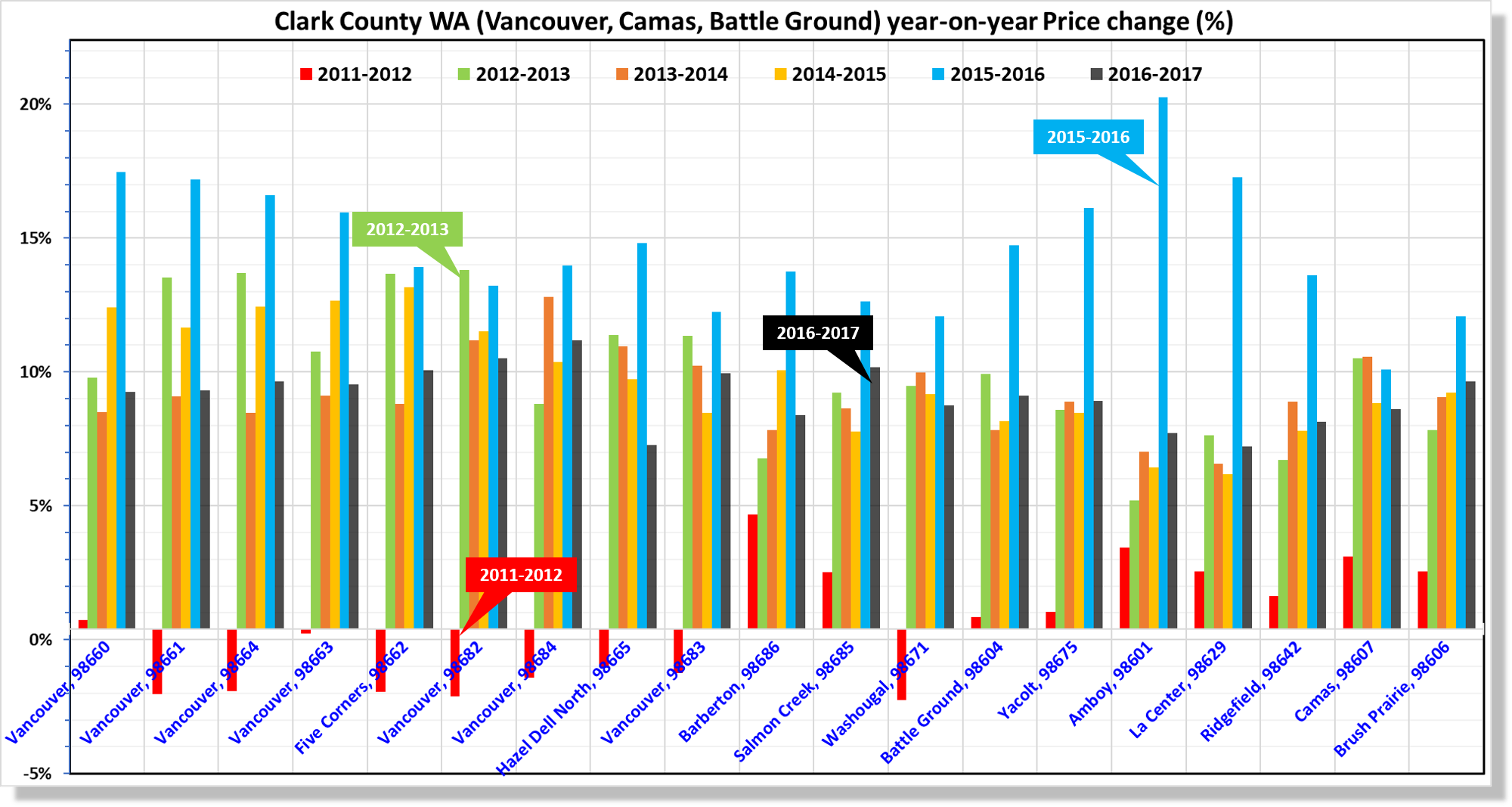 Figure 4. See you on the other side. Home price change (in percent) by zip-code in Clark county, Washington state (part of the Portland Metro, on the north side of Columbia river. Click to enlarge). Key summary: (1) Much more affordable due to lower cost to buy, lower property taxes, lower closing costs, no income tax in Washington state & better schools than Oregon; (2) across all neighborhoods, a consistent 10% growth except 2011-2012; (3) only reasons holding back are heavy rush-hour traffic to cross the Columbia river & Oregon state tax for people working in Oregon; however, lot of new businesses have moved here recently, especially financial firms including Fisher Investments that has helped raise the median household income. Data from Zillow and raw data here. To see the actual home prices by neighborhood, see Chart of the day, Aug 2, 2017. 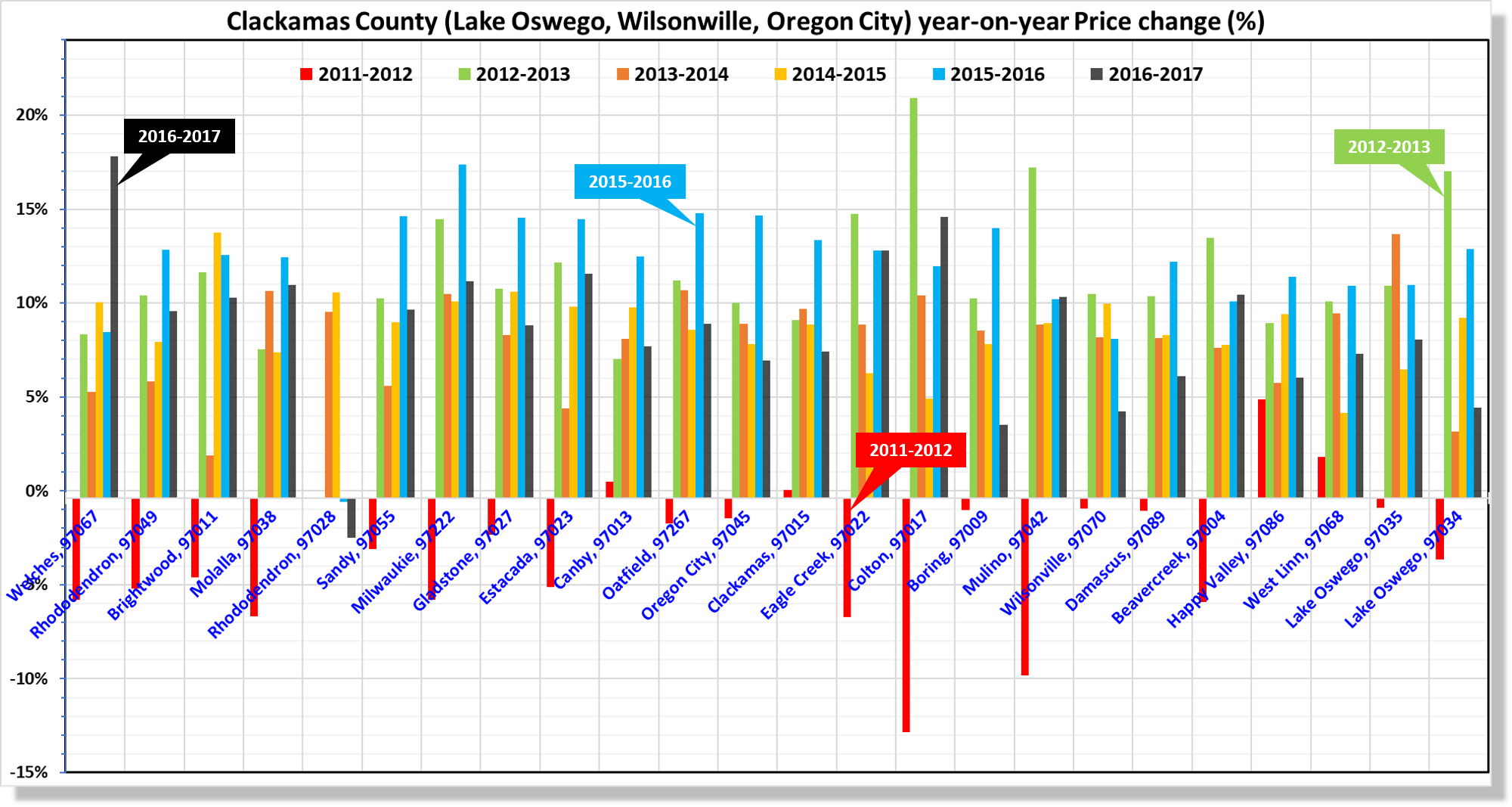 Figure 5. A study in contrast. Home prices change (in percent) by zip-code in Clackamas county, OR. This county includes the affluent neighborhoods of Lake Oswego, the beautiful Columbia River Gorge, the high-tech area of Wilsonwille, and part of Willamette valley (Click to enlarge). Key Summary: (1) This is one of the most economically diverse regions and affordable neighborhoods are still growing over 10%; (2) the sought-after area of Lake Oswego is comparable to downtown Portland & therefore growth has been comparable to Multnomah county; (3) the high-tech area of Willsonville has not seen growth comparable to Washington county therefore growth has been sluggish. Data from Zillow and raw data here. 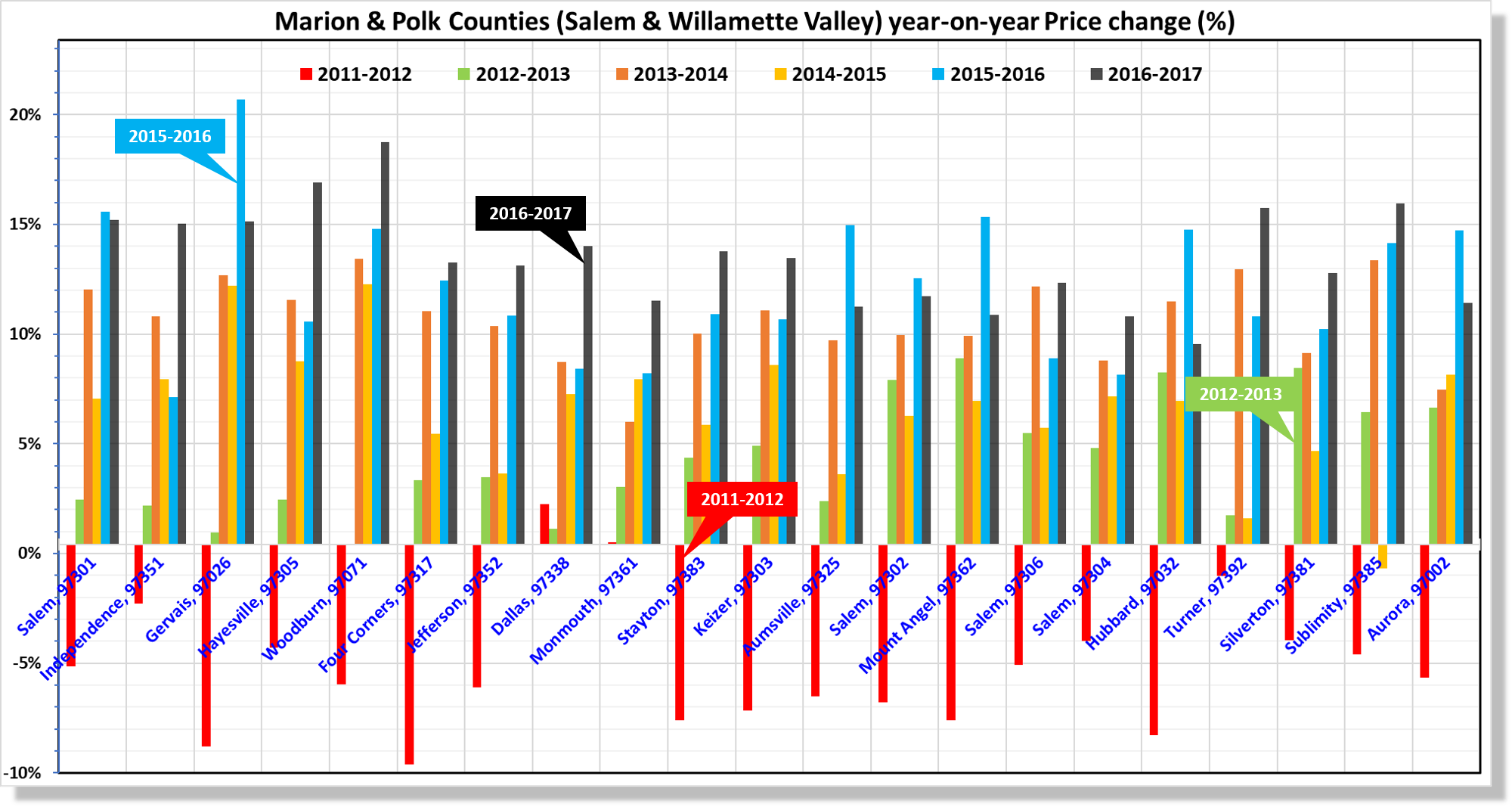 Figure 6. In the middle of action. Home price change (in percent) by zip-code in Marion & Polk counties, OR. These include the state capitol & the agricultural communities of the beautiful Willamette Valley. (Click to enlarge). Key summary: (1) Very different growth trajectory than the Portland Metro area; the area was hard hit during 2011-2012 but has slowly recovered and is seeing the best growth right now; as Portland Metro grows out of reach, more people are moving to these affordable neighborhoods; (2) most of the region is over an hour drive away from Portland Metro, making the high-tech growth inaccessible; (3) most likely jobs are related to agriculture, administration, health & medicine & tourism, thus the different growth trajectory. Data from Zillow and raw data here.

2 thoughts on “Summary of Portland housing growth – in 6 charts”